The Cappello occupies one of the most interesting Renaissance buildings in Ravenna. And 'situated in Via IV Novembre at number 41 (formerly the Fish Road, then Via Urbano Rattazzi) at the corner of Vicolo Casa Matha (formerly of St. Michael).
The popular tradition was born that there was Francesca da Polenta, wife of Giangiotto Malatesta, the unfortunate lover of Dante's Divine Comedy, but the palace of Guido Minore da Polenta, his father, was at Port Ursicina (now Porta Sisi) and above the house, present location of the hotel, is back almost two centuries. It dates back to the fifteenth century at the time of the Serenissima rule over the city (1431-1509).
The building is a perfect example of classical Venetian architecture: the warm shades of terracotta is pleasantly contrasted by the white marble balcony with small columns, with two pine cones stacked on the corner pillars, supported by curved shelves. Even the door is the marble walls, with fine Renaissance-style decor and so is the jambs of windows.
As in other houses of the Venetian period, the gable side, facing the alley, is not sharp, but broken. In the corner edge there is a marble pillar with capitals.
The house was built in the ground on which he had direct rule of the Class Monastery. It states that 19 December 1431 was given at the level (such a contract all'enfiteusi) Magdalene from Bartholomew Gualdoni who declined investiture in 1468. On December 28 of the same year he was granted to Giovan Francesco was Bertuzzo of arms, doctor law in Ravenna, which in 1440 had been the vicar of Ostasio Polenta and 26 January 1469 will be created Count Palatine of Emperor Frederick III. At his death, took over as heir, Paul, filius animae the same G.Francesco and was succeeded by February 22, 1518 the Count Girolamo, son of the late cav. Marcantonio Arms (son of G.Francesco).


In 1533 the house passed to Mary, daughter of the knight and Count Marcantonio arms and was certainly the property of the family arms until the first half of the '500. Later, the building belonged to other noble families of Ravenna, including the Maioli Prandi. The Bernicoli reports that was once home to the humanist Flavio Biondo of Forli in the period of his stay in Ravenna.
E 'to remember, as a curiosity, that before 1885, a small door where mail is currently the first great modern door, leading to the office or dell'Annona Grascia.
Gaetano Savini writes that in this house, on the ground floor, there are also been an umbrella factory and a warehouse.
In 1885 the house was used as a hotel (called the Hat or Hat or Al Cappello) by Pietro Minzoni, father of Don Giovanni Minzoni, Archpriest killed by the fascists for their democratic ideas in 1923 in Argenta.
On the hotel's name is no certain information. But the fact is, that as "hat" or "hat" or "Hat" were entitled in the past many hotels and inns in Italy and abroad. "Hat" was evidently become a classic name for a hotel.
Teaches a "hat" or perhaps more properly "the Hat" could also be interpreted as a sign of social distinction in a time when not all wore hats, so a "Albergo Cappello" could designate a hotel whose patrons belonged to a pretty high class.
Just in 1885 the main body of the ancient building underwent a complete renovation of the interior spaces, stairs and ceilings, which allowed him to derive 24 bedrooms to be used as the hotel business. Externally, the big four original ground-floor windows were replaced to open three large gates; always queglli years, in the pediment on the alley, some windows with round arches bought rectangular shapes.
During the twentieth century, the Hotel Hat has always been the center of social and cultural life of Ravenna; in its halls he was held on November 26, 1948 the first meeting that would bring the month following the establishment of the Rotary Club of Ravenna.
Since 1885, for about a century, there have been several managements until you get to 1984, when Raul Gardini, Ravenna and well-known industrial 80s, bought the building, at that time in less than optimal conditions. Followed long years of laborious and complex restructuring that returned to the palace not only the ancient internal divisions but also hidden preciousness for centuries.
Under numerous layers of lime, plaster and wall coverings, they returned to light traces of decorative cycles of the sixteenth century of exquisite workmanship, which made it necessary and urgent to an articulated intervention of uncovering and restoration.
The result is now visible on the main floor of the building, where five rooms (Living Blue, Rose Lounge, the large hall, room 106 entitled "Towards the blue" and the room 103 "Dream Amaranth"), revealed decorative cycles high formal quality, articulated in the wall paintings and painted wooden ceilings.
Among the decorations of wooden ceilings, which develop Bandinello, tablets and ordinatura beams, molded according to a fifteenth typically decorated with secular subjects and mythological and heraldic insignia, stand out in particular performed decorations certainly a wedding present: indeed appear among coats of arms arms and Rasponi, the profile portraits of two young, between amorous slogans and promises of fidelity.
The wall decorations, the late Renaissance style, refer to the genre of the grotesque, but with all the local peculiarities, both for individuals and for the austere color choices; in an old room on the main floor, in the Blue Lounge, there is also a decorative cycle that may indicate a kind of mixture between a genre scene and landscape, illustrating the techniques of hunting, told by a illusionistic structure adorned with cartouches. The restoration, completed in 1993, brought back to its former glory the noble building, declared by the Superintendence for Architectural Heritage, "National Monument".
Today the hat is the only hotel reality of the 800 still in business in Ravenna. The original twenty-four rooms at the the last century, after the restoration that have brought the Renaissance building the ancient surfaces, were reduced to seven. Rooms fine, some of which are unique fresco, which allow the business and leisure traveler to experience a special atmosphere, that of Ravenna Dante and Byron, a building that, despite the changes, jealously guards its art treasures.
The top floor of the building, occupied in the past by the floors and very small rooms is a beautiful conference room was made, whose peculiarity is the ceiling is made of wood, perfect reconstruction of the keel of a boat. 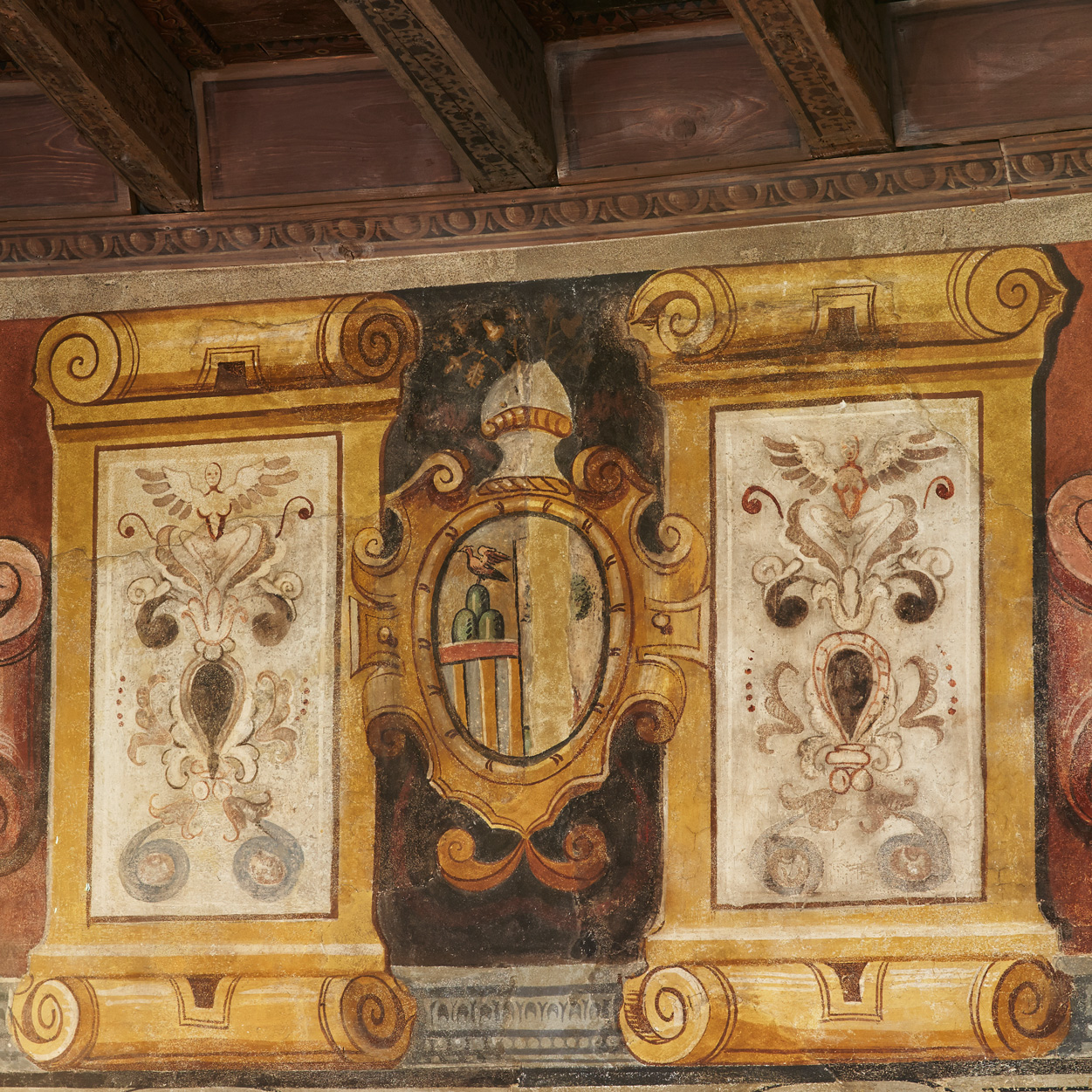 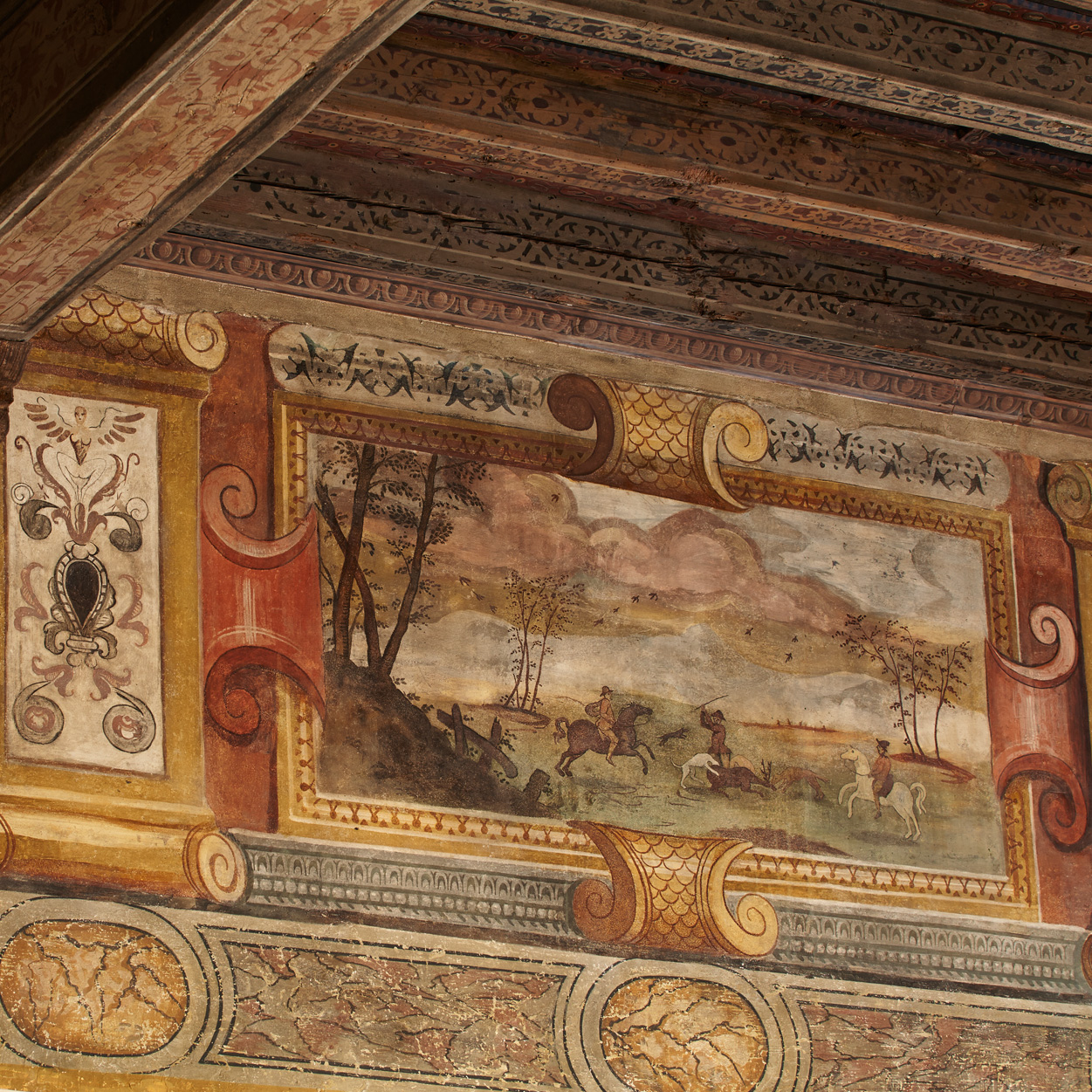 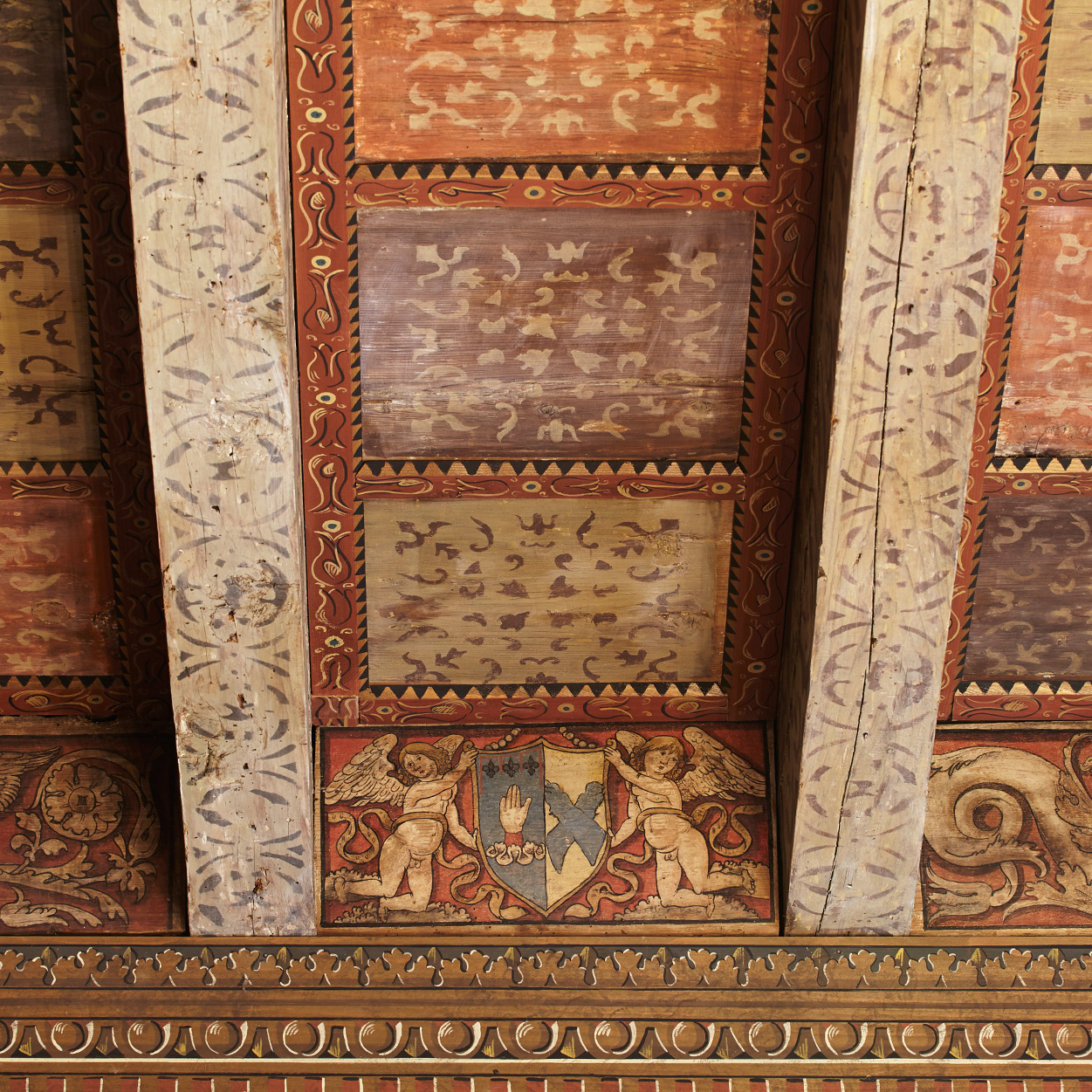 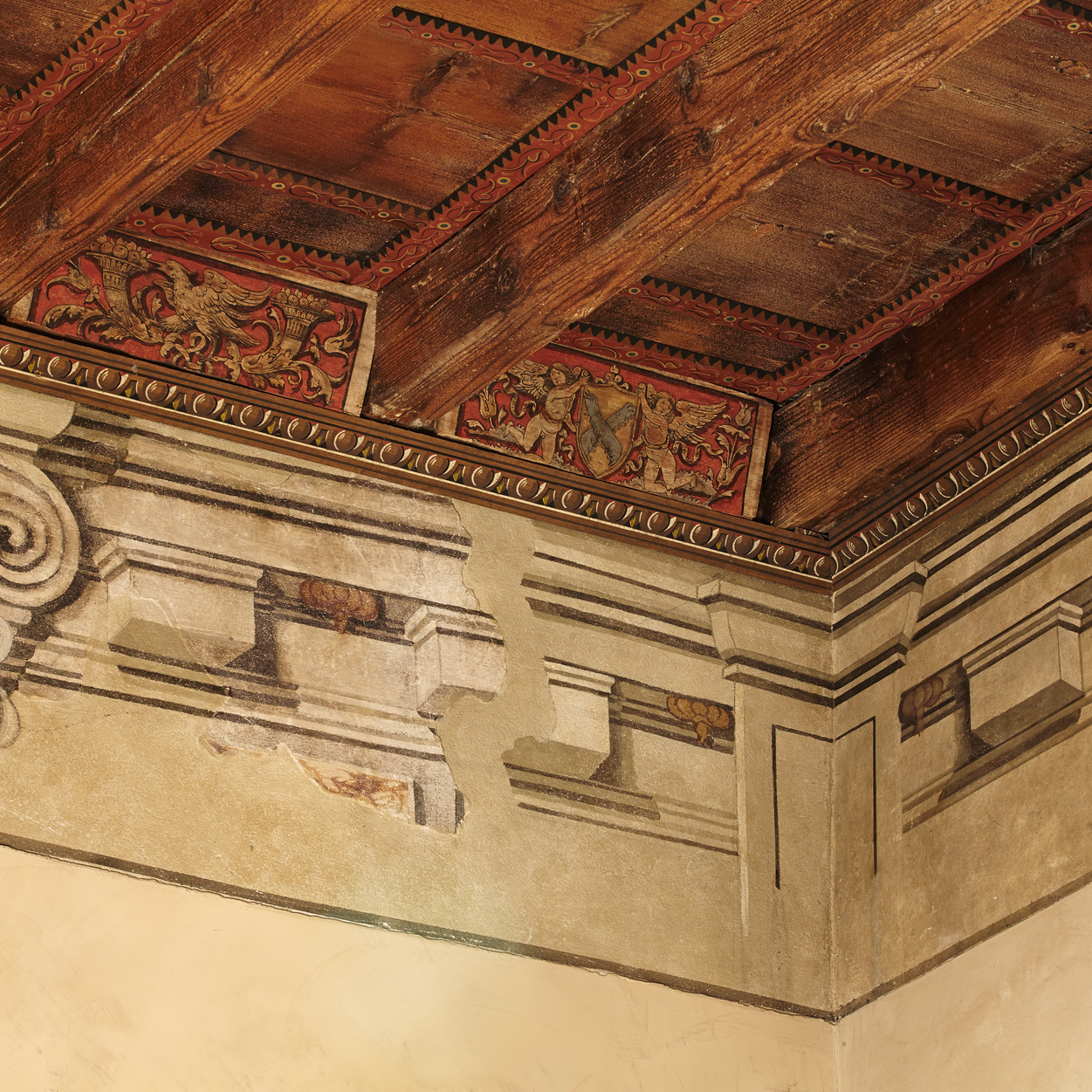 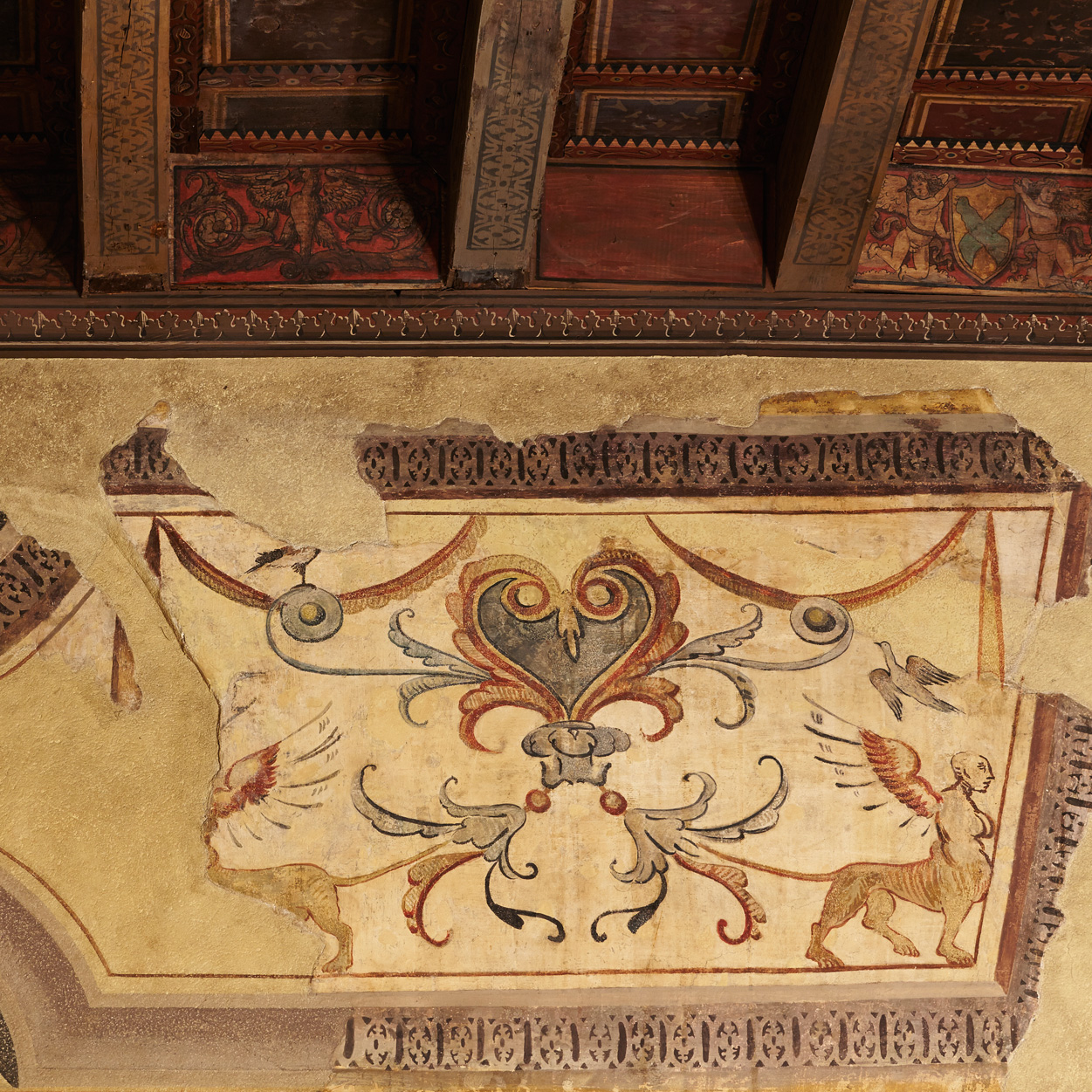 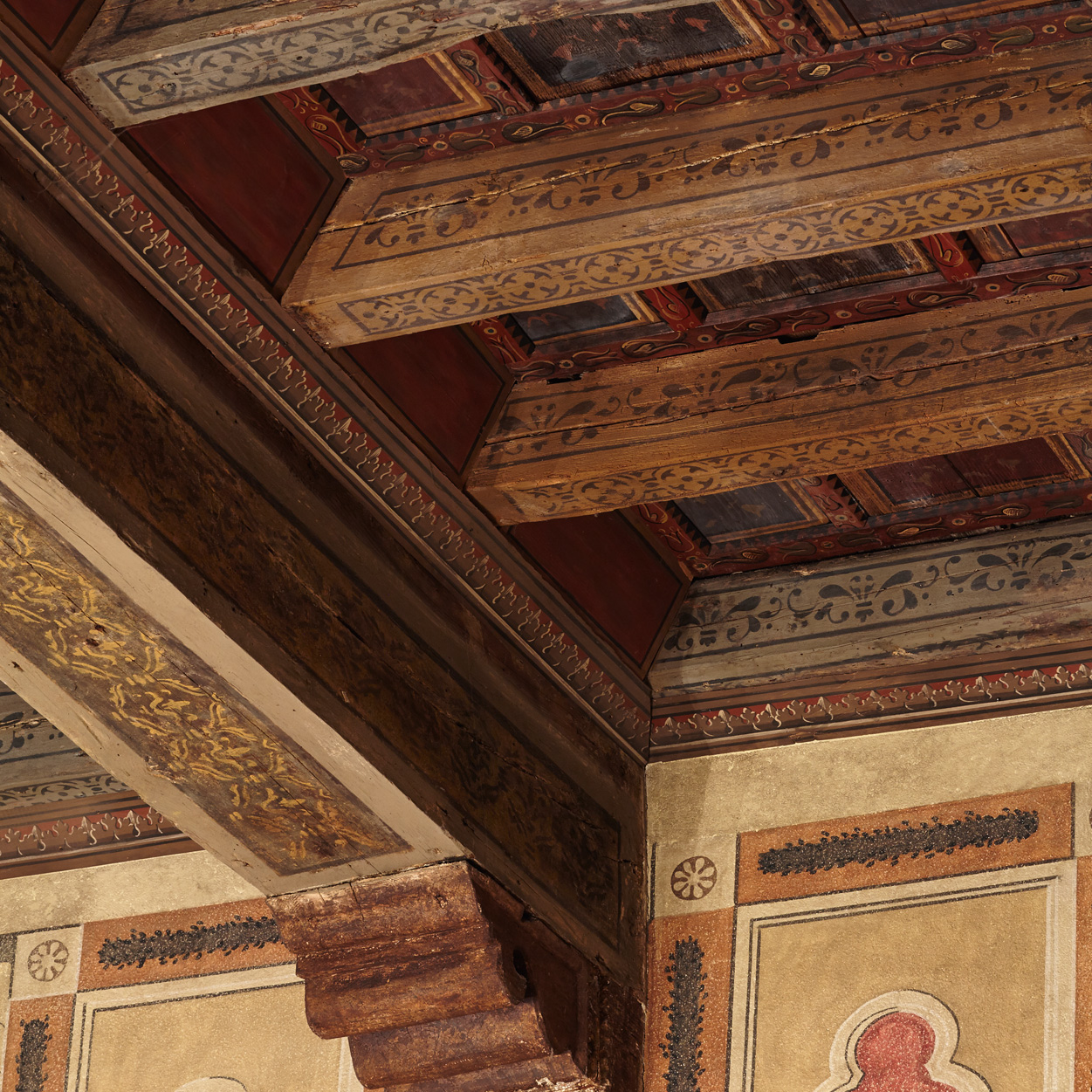 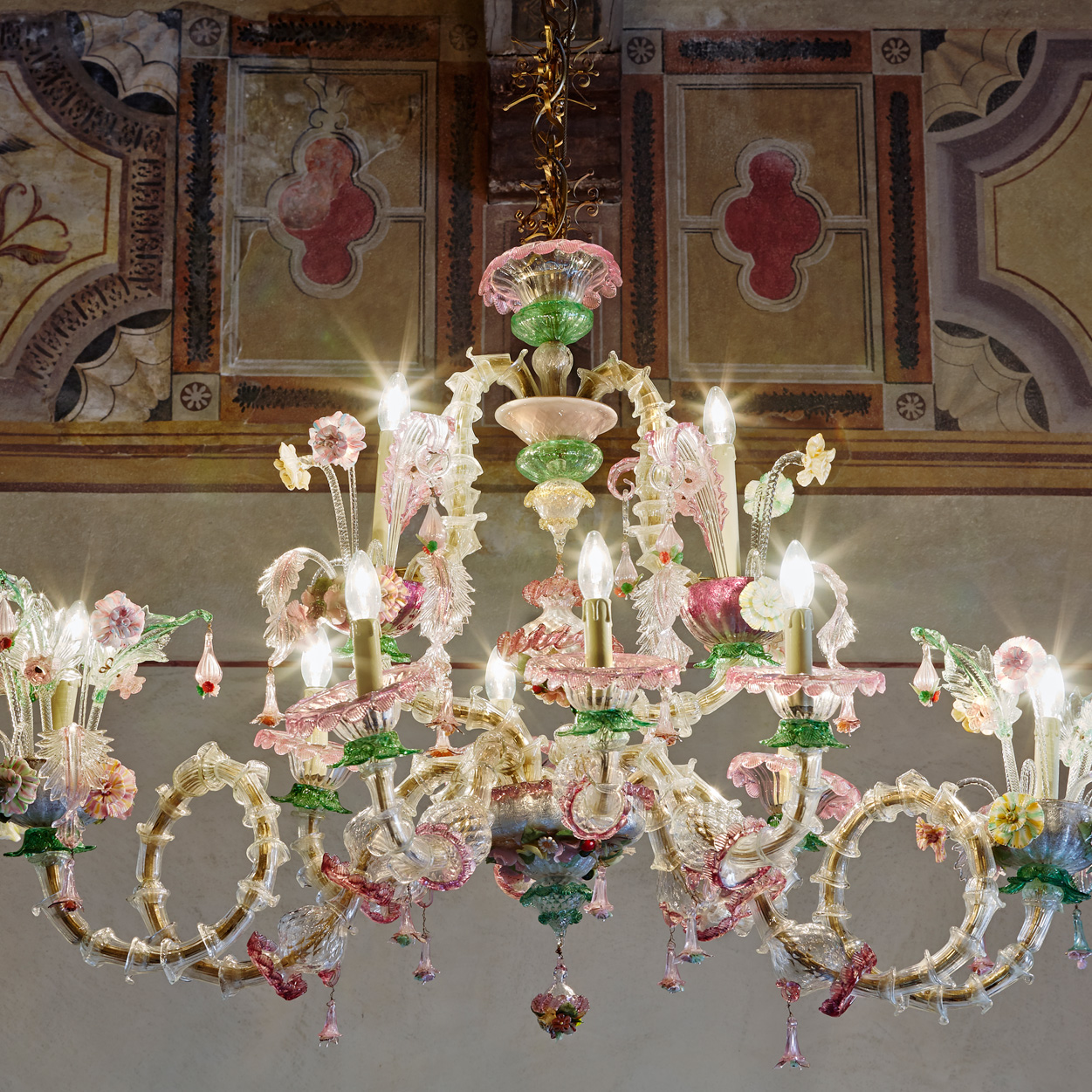